The summary from goodreads:
During Ramadan, we're not allowed to eat from sunrise to sunset, for a whole month. My family does this every year, even though I've been to a mosque exactly twice in my fifteen years. My exercise-obsessed mom—whose hotness skipped a generation, sadly—says I could stand to lose a few. But is torture really an acceptable method? I think not.

Things wouldn't be so bad if I had a boyfriend, but my oppressive parents forbid me to date. This is just cruel and wrong. Especially since Peter, a cute and crushable artist, might be my soul mate. Figures my bestest friend Lisa likes him, too.

To top it off, there's a new Muslim girl in school who struts around in super-short skirts, commanding every boy's attention—including Peter's. How can I get him to notice me? And will I ever feel like a typical American girl?

Doesn't that sound like SO MUCH FUN? I cannot wait to read this one.
Posted by librarian pirate at 6:42 PM 1 comment:

Realistic Fiction for the Fantasy Lover: Also Known as Not Necessarily Magical but Highly Improbable

Being a librarian I tend to put books into categories and a few weekends ago my coworker and I were discussing a fantastic new trend that we call:

Realistic Fiction for the Fantasy Lover: Also Known as Not Necessarily Magical but Highly Improbable

Among the books for this series are:
The Series of Unfortunate Events
The Kneebone Boy
The Incorrigible Children of Ashton Place (side note: I'm only halfway through the second book of this one and I have a feeling that before the series is done someone will be outed as a werewolf? But I'm not positive about that yet and the first book is firmly non-fantasy so I stick with it being on this list.)

I know that there are more books I've read recently that would fit into this category but right now I can't think of any. What about y'all? Any Not Necessarily Magical but Highly Improbable books on your recently read list?
Posted by librarian pirate at 7:33 PM No comments:

My husband pointed me in the direction of this Periodic Table of Storytelling that I think is absolutely amazing. I've definitely printed it out for putting above my desk.

J K Rowling is about to launch a new website called Pottermore and she has some sort of big announcement on the horizon? Color me SUPER EFFING EXCITED! As you all know by the last few books libraries and bookstores around the country were throwing huge parties every time a book came out. I was working at Barnes and Noble when book 6 came out and it was a blast. But since I technically worked in the cafe I wasn’t involved in the PLANNING or the ORGANIZING. I had just had a baby and was working at Oak Park Public library when book 7 came out but since I was an intern I wasn’t invited to work at the party and since I’d just had a baby I chose not to go. Ya know, be the creepy adult who clearly doesn’t sleep enough but who comes to the kid’s party anyway? And some bookstores/libraries have parties for the movies but that’s just weird. Those parties should happen in line to see the midnight showing.

So … I am BEYOND excited about this. I want my chance to plan a kick-ass Rowling party. I even have my costume all picked out. I’m going to wear Brandon’s big ole penguin slippers, a tutu, my pirate hat, and probably my red military jacket. Whenever anyone asks me what I’m supposed to be or what I’m dressed up as I’ll say a little too loudly and quite nervously while looking around, “why, I’m a muggle! Just like you! I got these clothes in one of your … er … our Muggle Garment Stores.”

Edit: Perhaps nevermind? I mean I'm still excited but according to Entertainment Weekly, "Scholastic told EW that the announcement will not be a new book." WHATEVER - A GIRL CAN DREAM, RIGHT? I WILL WEAR MY MUGGLE COSTUME SOMEDAY!

Am I the only one who got all teary when Fuse #8 had her baby? SO BEAUTIFUL!

I've been an absolute slacker on reading blogs lately. My google reader overfloweth! If any of y'all see me commenting on random posts from months ago don't be alarmed, I just am behind everywhere.

I love this! Author Mary Roach tweeted, "This is a first: Guy mailed a fan letter, a $10 bill, and apologies for having downloaded a pirated copy of Packing for Mars. Forgiven." While I am not a book pirater, I remember a story of a woman who was TOTALLY NOT my mother who's children were obsessed with a library book called Andrew Henry's Meadow*. At the time the book was out of print and we her children checked it out over and over again and she couldn't find it used anywhere so eventually she just photocopied the whole thing. Is it really that unethical to photocopy an out of print book if you then send $10 to the author?

*eeek! It's back in print! I am SO buying myself a copy.
Posted by librarian pirate at 5:06 PM No comments:

Howl's Moving Castle, Castle in the Air, and The House of Many Ways 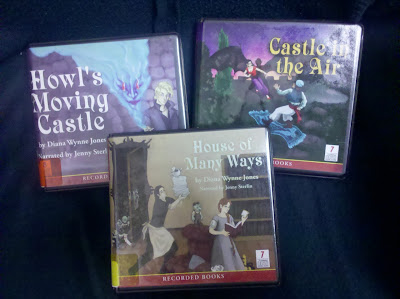 Title: Howl's Moving Castle, Castle in the Air, and The House of Many Ways
Author: Diana Wynne Jones
Narrator: Jenny Sterlin
Publisher: Recorded Books
Pub Date: 2008, 2009, 2009 (recording pub dates)
Reviewed from: My library's copies that I checked out with my very own library card

Back when Diana Wynne Jones died I read all sorts of articles about how great she was and it occurred to me that I had never read anything by her. I'm constantly sending fantasy fans her way but I had never quite sent myself her way. So I'm in the process of rectifying that.

While I am not a huge fan of .gifs nor am I a huge fan of swearing, there is a sweary .gif that regularly makes the rounds of tumblr that, I believe, perfectly encapsulates the Howl books and it is linked here for your viewing pleasure. These are books about strong women (at least Howl's Moving Castle and House of Many Ways are) who know what needs to be done and if they don't know then they will figure it out, gosh darn it!

Ok, Howl's Moving Castle is, according to the name, about the Wizard Howl but really it is about Sophie who can do magic mostly because she is so darn stubborn that things have to do what she tells them to. When she gets turned into an old woman she is annoyed at the aches and pains that go along with it but also likes how being an old woman gives her credence to say whatever she wants to say and do whatever she wants to do and just be the kick-butt lady that she is!

Castle in the Air isn't quite as good probably because it's main character is a man and a much less likeable man then most. I'd say that Diana Wynne Jones isn't as good at writing male characters as female characters except I'm not reading The Chronicles of Chrestomanci and she nails it there. I think it's just Abdullah is meant to be obnoxious and dense and unlikeable. BUT totally worth reading because it brings you on to ...

House of Many Ways. I want to know more about Charmain. She's fantastic and all she wants to do is sit down and read a good book, darn it, but unfortunately she has agreed to watch her Great Uncle William's house while he is off getting cured by the elves and Great Uncle William just happens to be the royal wizard and Charmain just happens to get herself involved in shenanigans. And hijinks. There is an evil Lubbock who is trying to take over the kingdom and some misdirected Kobolds who are all in a tizzy about the color of the flowers in the garden and her Great Uncle William's house is a maze of folded space and time. Charmain, as I said, gets lumped into this mess and she fixes the whole thing (spoilers? What, like you didn't know it was all going to turn out? Hush. Read the book anyway to figure out how it happens and why and who. Very much who. The characters are all the best.) pretty much because she wants everyone to leave her in peace long enough for her to get some reading in! That's the kind of superhero I want to be.

These books are all narrated by Jenny Sterlin and she's fantastic. She's got this air about her narration that reminds me of Sophie and Charmain in that she's telling you what happened and there will be no nonsense while she's reading you this story so just sit down and listen. Honestly I got so much cleaning done (I listen to audiobooks while cleaning my house. I am desperately boring) just because Jenny Sterlin's narration did not allow itself to be turned off.
Posted by librarian pirate at 9:08 PM 2 comments:

Oh mah goodness - I have a play date and the internet blew up! So WSJ wrote a pearl clutchingly awful article about the state of YA today. It's full of doom and gloom and we're ruining our kids with darkness. One of my tumblr friends Becoolsodapop wrote a brilliant take-down of it and then Tiger Beatdown, one of my favorite feminist blogs, wrote another great article on it.

There is a great article at Bad Reputation called Princesses, Pigsties, Pirates, and a Publishing problem that is a wonderful talk about the state of feminist literature in kids/ya today.

(I found out about all of this from my friend Anna who is mostly found over here.)

Anyway - my house was recently been invaded by the 5 cutest 6 and unders you've ever seen and my husband has been diligently cleaning while I type this. I should probably go provide some help, right?
Posted by librarian pirate at 2:48 PM No comments:

Goodnight Moon is part of our bedtime routine. After all the other things - nightly ablutions and kisses to everyone, we climb into bed and I read book after book to the girls. The last one is always Goodnight Moon. Kins has had it memorized for almost 2 years now. Tonight Pips and I were both in ridiculous moods so I was playing with the text a little and Pips was giggling and suggesting ideas (that mostly involved inserting blueberries into the text).

"In the great green room there was a telephone and a red balloon and a picture of the cow jumping over MOUNT EVEREST! And there were three little bears sitting IN THE BATHTUB!"

Kins kept correcting me but I thought it was all in fun. After, at Pip's suggestion, we discussed the quiet old lady who was EATING BLUEBERRIES, Kins burst into tears. "THAT IS NOT RIGHT! THAT IS NOT WHAT SHE IS DOING SHE IS WHISPERING HUSH AND NOT EATING ANYTHING AT ALL LIKE A BLUEBERRY!" She only calmed down again after I promised to never read Goodnight Moon wrong again. In the future I am going to remember that bedtime is not the time to mess with the Kins's carefully constructed world views.
Posted by librarian pirate at 9:57 PM 2 comments: